A Wounded and Homeless Dog

This photo was taken in the June of this year. At that time, it became pretty good without wounded leg and skin diseases. 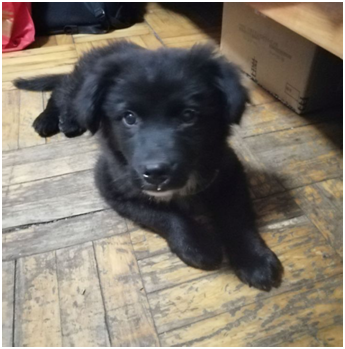 In March of this year, I ran home at night and found a little dog next to the trash can on the roadside. It had blood on its legs, and its hair was dirty and messy, like a stray dog without a home. At this time, an security guard passed by and I informed him of the matter. The security said that he had seen this puppy many times, and he was walking alone over there. When I heard of this news, seeing the hurt puppy, I was very sad. And then I said to the security: “Since there is no owner,I will adopt it first.”

After taking it home, it was very timid, hiding under the table and refused to come out. I knew that it must have had no dinners. Then immediately, I ran to the kitchen for preparing some food in order to feed it. Maybe it was so hungry or smelled the taste that it got out of the table. And it slowly approached the food and ate. When it finished eating, I noticed its injured leg and wanted to help it deal with the wound. But when I took the ointment from the medicine box, I found it was missing.

After searching inside my house several times, I found that it was hiding under the sofa. Holding all kinds of delicious things to induce it to come out, it didn’t come out. Then about two hours later, probably because the wound was too painful, it came out timidly and walked to me with its sincere and hopeful eyes. At that time, I burst into tears and decided to take care about it carefully. With holding the ointment gauze, I gently help it to smear the wound and cleaned the blood. For fear that I might hurt it again when I cleaned its wound.After cleaning, I put it on a clean and comfortable mat and let it rest. Because of the wound, I didn’t take it for a shower.

The next day, early in the morning, I got up and prepared a food for it.Then after the breakfast, considering its wound, I took it to pet shop. In the pet shop, the veterinarian told me that the little dog not only had a wound in its leg but also had a skin diseases. Hearing these, I directly told him to treat the little dog. Now, it becomes good well. And when I am busy working, it always accompanies me. Now it ‘s my little dog.